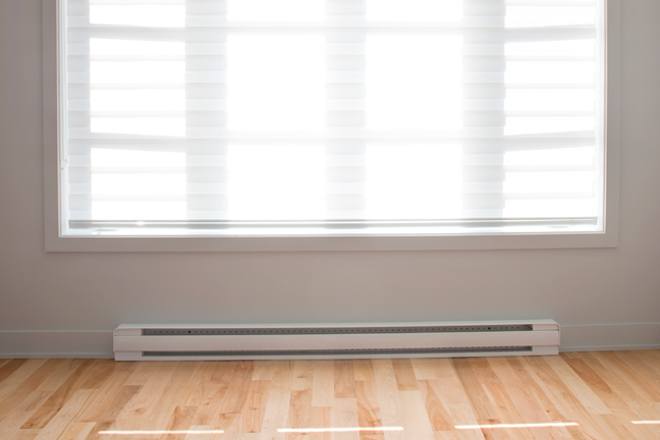 Over the years we’ve had many questions about ticking, humming, popping or even banging or clicking noises coming from electric baseboard heaters or hot water heated baseboard heaters. The main complaint is that they are loud enough to wake people up – or subtle enough to cause buzzing in the ears that just never turns off. Unfortunately, over winter, these electric heaters turn on and off frequently when their thermostats tell them to.

Electric heaters are one of the most common heating systems across Canada, so they are well known. They are inexpensive to buy and relatively quick to install, which is also probably a large part of the reason they are so often chosen.

Electric baseboard heaters are basically zone heaters. They are typically installed underneath windows where the heater’s rising air counteracts falling cool air from the window’s glass, and are controlled by thermostats within the room where they are located.

So it’s normal for baseboard heaters to be noisy?

Baseboard heaters are notorious for emitting different sounds. The clicking and buzzing noises are “normal” in so much that too many of them do it and do it too frequently.

These sounds are mostly due to the metal reacting to sudden changes in temperature when they are turned on after a prolonged shutdown, or when they begin to heat up when the temperature drops. Noises are caused by the expansion when starting, and the contraction when cooling, of the metal components of the baseboards.

Cheaper or older bimetallic thermostats let the heaters cool right down before reactivating, and so starts the vicious circle of metal cooling and heating significantly rather than gently and more often – often called “cycling.” This in turn adds to the potential for noise in baseboard heaters, and can cause them to fail prematurely to do highly repetitive thermal shock.

WARNING: Before doing anything related to pulling covers off electric baseboard heaters or thermostats, remember to turn off the circuit breaker for the baseboard heaters and their control system. If it’s not immediately apparent which breakers this is, then we’d have to suggest that the first step should be to ensure the electrical panel on the home is correctly labelled.

Also, if at all uncomfortable or inexperienced with electrical work, our top tip is to call a registered professional first, rather than find out why it would have been a good idea later! And – before touching any heaters, it’s also a good idea to ensure they are cool, because the electric ones in particular can get very hot and can cause severe burns.

First step, which baseboard heaters are the noisiest?

To identify where the noise is coming from accurately, first make a note of which heaters are the ones making the most noise. In our experience, every home with baseboard heaters has 2 or 3 that make more noise than the rest combined.

If living in a home heated with electric baseboard heaters where family members have been complaining about noises keeping them awake or startling the dog, enlist their help. Once the main culprits are identified, there are some initial checks to do that should be part of regular maintenance for baseboard heating and preparing a home for winter.

Baseboard heaters, or their inlet vents, should sit level and at least three-quarters of an inch above the floor, carpet, or rug to allow the cooler air on the floor to flow under and through the electrical heating element or the fins on a water-heated unit.

If a carpet is especially thick, consider moving the heater up the wall to give the required clearance underneath, or trim the carpet down around the base of the heaters. If the air can’t circulate, then they can’t heat or cool efficiently.

Close proximity to something combustible like a carpet can also cause premature failure, or worst-case scenario in electric ones, a fire. Incorrect or insufficient airflow can also cause them to be noisy because the thermostats won’t be functioning correctly if located in the unit. Once certain that the baseboard heater is correctly positioned on the wall, make certain that the top of them isn’t covered by curtains when closed or by the back of furniture – once again – air circulation is essential!

Cleaning baseboard heaters and setting the fins for quiet running 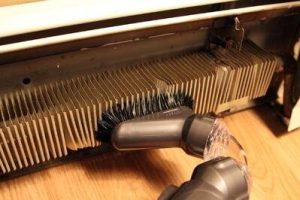 Next, carefully work out how to remove the front cover from the heater, having already shut off the electricity if needed, and checked that it is cold. Next, look closely at those heater fins; are they bent or touching? They shouldn’t be – being careful not to cut fingers on sharp ends gently bend them away from each other in a consistent way. Having a consistent airflow through a baseboard heater is also the best way to minimize the black streaks they sometimes cause up the wall behind.

Loosening the screws slightly can allow the metal to expand and retract quietly without snagging up and letting go with a ping. Result! The importance here for quiet operation is as follows – if the screws are too loose, this can cause rattles and buzzing, if they are mid-way between tight and loose, this can cause the sudden pings, bangs and crackling noises as expanding or contracting metal moves with a rush. If very tight, this can cause the case to distort, which will then cause the cover or the heating element to make noises as it moves around in the case. If at first any of these changes make the noise worse, then try something else from the list.

Check that the voltage is correct and the amperage of thermostats

If a 120-volt baseboard heater is connected to a 240-volt power supply, this may be the cause of a humming noise, burning smells or worse still, a fire.

Some noisy baseboard heaters are water heated – so we should also mention them specifically even though they are relatively less noisy compared to electric ones. To throw a ‘spanner in the works’, when water-heated baseboards do make annoying noises, it is entirely possible that the rattling is coming from the expansion of the pipes in the heaters as hot water enters them. To reduce this noise, insulating foam strips can be forced between the pipes and the elements that surround them, and metal clips holding pipes can be lined with duct tape to enable pipes to slide silently.

The noise can also come from the boiler via air passing through the system, or a solenoid valve closing too quickly, which then creates pressure in the system and forces the radiator valves to open or close too quickly in turn, and go bang in the night.

If the noise from water-heated baseboards sounds more like a hammering, the temperature of the water flowing through the radiators is probably too hot and turning into steam, which also makes it expand. Note, if the circulating water exceeds 220 degrees, a technician should be contacted quickly before the boiler or home heating system is damaged beyond repair.