What is an ice dam on a roof? 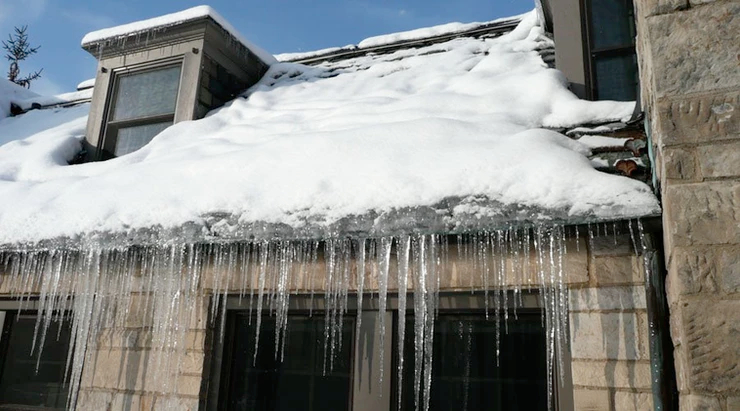 What is an ice dam on a roof?

An ice dam is a ridge of ice that forms at the edge of a roof and prevents melting snow from draining. As water backs up behind the dam, it can leak through the roof and cause damage to walls, ceilings, insulation and other areas.

How do ice dams form?

Ice dams are formed by an interaction between snow cover, outside temperatures, and heat lost through the roof. Specifically, there must be snow on the roof, warm portions of the upper roof (warmer than 32°F-0°C), and cold portions of the lower roof (at freezing or below). Melted snow from the warmer areas will refreeze when it flows down to the colder portions, forming an ice dam.

Although the primary contributor to snow melting is heat loss from the building’s interior, solar radiation can also provide sufficient heat to melt snow on a roof. Gutters do not cause ice dams to form, contrary to popular belief. Gutters do, however, help concentrate ice from the dam in a vulnerable area, where parts of the house can peel away under the weight of the ice and come crashing to the ground.

Ice dams are problematic because they force water to leak from the roof into the building envelope. This may lead to:

Keep the entire roof cold. This can be accomplished by implementing the following measures:

Prevention and Removal Methods to Avoid